“The court music” is normally understood as types of music, including other music types served with dance and opera, used in worship rituals and in the imperial court, in national festivals which the imperial court organized entertainments for the king and royal families. Regarding the name “Nhã Nhạc”, it carried different meanings under feudal dynasties in Vietnam. Sometimes, it meant court music in general, music feast in particular; sometimes it related to music organization, even a certain orchestra. 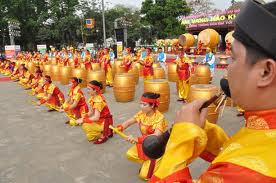 In the past, the Hue court included a variety of kinds: court music used to Te Giao ritual; temple music for the temple rituals; five music types for sacrifice rituals of the Divine Farmer, the city God; dynasty music for big festivals or for welcoming officers from foreign countries; party music for big parties in the court. 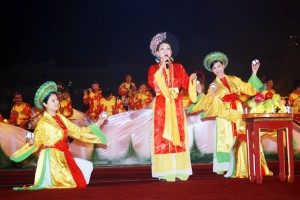 At the official meeting of the World Heritage Committee (WHC) in Paris, Nha nhac, Vietnamese Court Music, that Hue has preserved so long, was officially listed by UNESCO among masterpieces of the Oral and intangible heritage of humanity on 7th November 2003. This is the first intangible heritage of Vietnam ever listed in this list, recognized the achievements of 10-year process of striving, tireless preparation of the central, local governments and the Hue Monuments Conservation Centre.