Phong Nha Cave is located in Phong Nha Ke Bang National Park, Vietnam. It is considered to belong to the top beautiful caves in the world. Of all about 300 caves in Phong Nha Ke Bang National Park, Phong Nha Cave can be the most appealing. Also, it is the longest river cave in the world which contains an underground river inside. That is the reason why its name was made appeared in the park’s name. People discovered Phong Nha Cave in 1899. During the Vietnam War against the American army, it served as a hospital, bomb shelter, and weapon arsenal. It was not until April 1992 that the whole cave was successfully discovered. It has been open to tourists since 1998. 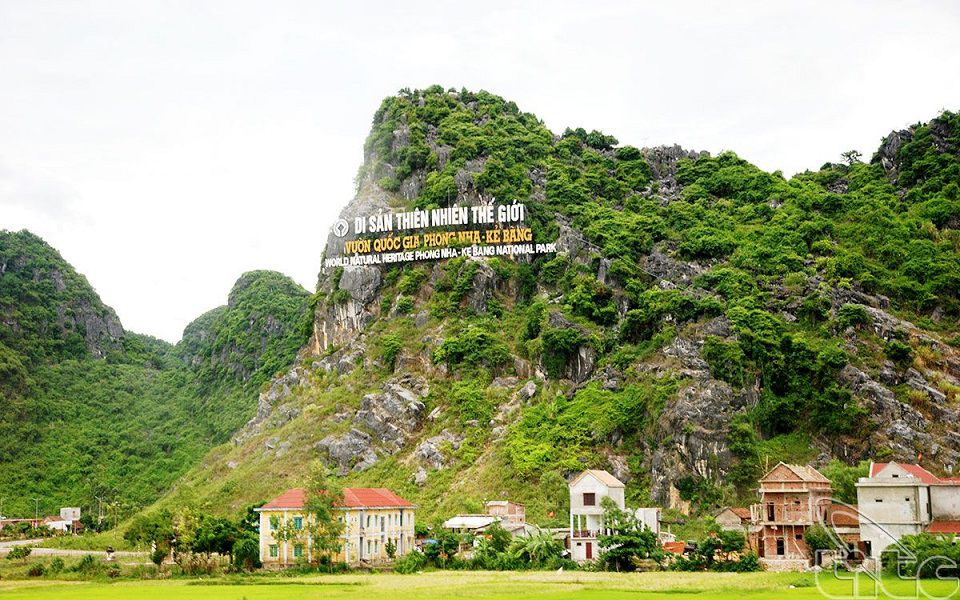 The cave can be divided into three sections including The Entrance Zone, The Twilight Zone, and The Dark Zone with different characteristics of light, temperature, and home animals. The Entrance Zone is a couple of meters long. This part of the cave is the brightest as it stays near the entrance. In the Twilight Zone, the entire cave is lined up by a lining system which creates a maleficent beauty. The Dark Zone is the most mysterious part of the cave as it is covered by the darkness, and tourists can’t get in without being guided. The only way to get to Phong Nha Cave is by taking a boat. The price is VND 360,000 per boat which is shared among the maximum 12 passengers.

Son Doong Cave was explored in 2010 and opened to tourists in 2013. It is estimated to be 2 to 5 million years old. Being 5 kilometers long, 2000 meters high, and 150 meters wide, it is the largest cave in the world, the so enormous cave that a plane can fly around inside. There are rivers, streams, and even mountains right inside the cave.
Since Son Doong Cave was opened, it has been attracting a vast number of visitors. Son Doong Cave can be visited from February because after August is the rainy season which makes the cave almost inaccessible. 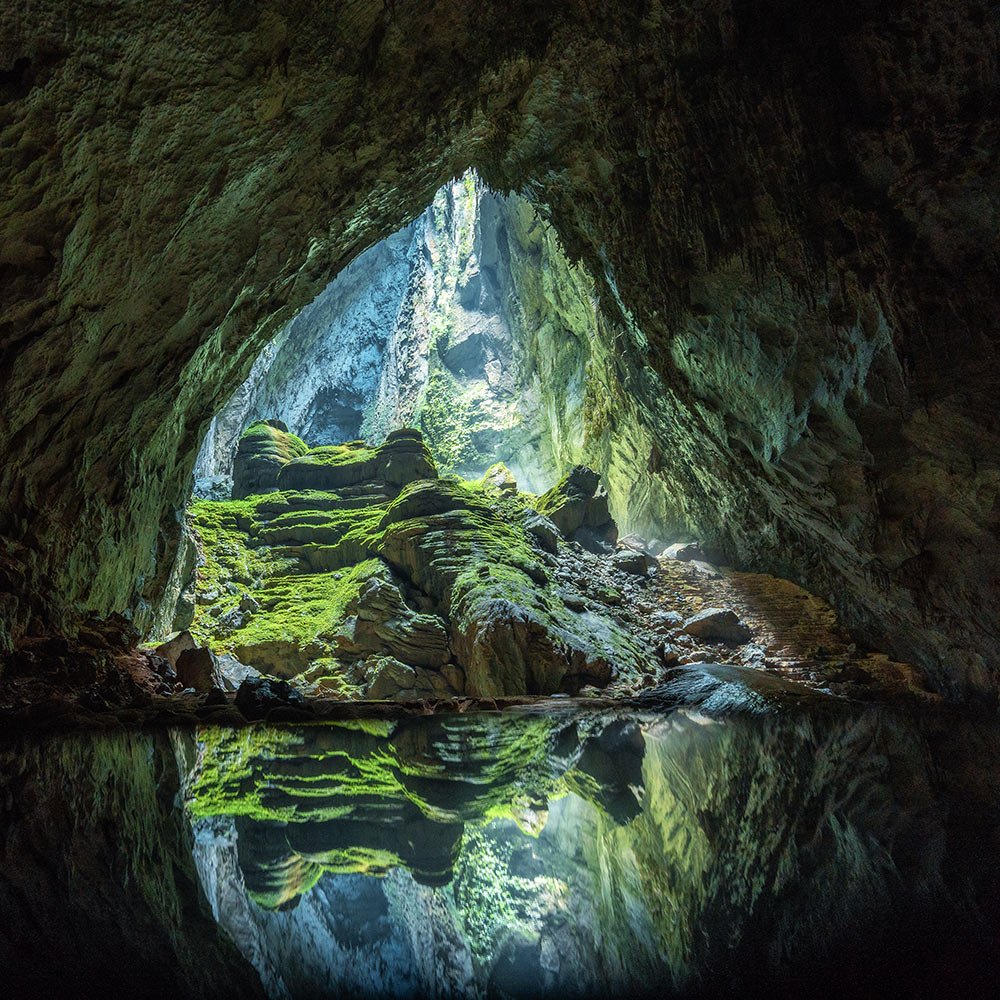 Paradise Cave – The dry cave in Phong Nha Ke Bang National Park, Vietnam
Location: Phong Nha Commune, Son Trach Village, Bo Trach District, Quang Binh Province, Vietnam
Length: 31 kilometers
Height: 100 meters
Width: 150 meters
Paradise Cave was discovered in 2005. With the length of 31 kilometers, Paradise Cave is the longest cave in Phong Nha Ke Bang National Park and the longest dry cave in Asia. The entrance fee costs VND 250,000 per person plus VND 5,000 for parking (if any). To get to the entrance of Paradise Cave, you have to take a buggy ride to climb upstairs. A four-seater buggy costs VND 60,000 one-way and VND 100,000 round trip which is shared between passengers. After about half a kilometer, you have to walk up to the entrance and then walk down into the cave-like passing the belly of the cave. Once standing in the middle of the cave, you must feel overwhelmed and amazed by the beauty of the cave which makes people name it the Paradise Cave.

A small tip if you go to Paradise Cave is that it will be a bit crowded in the afternoon because tour groups often arrive at this time. If you would like to have the whole cave for yourself, go earlier. If you are adventurous people, you must be interested in joining the Paradise Cave Underground Trek. You will be aided by a headlamp, guided by a tour guide going deep into the cave and have lunch in the cave, enjoy the skylight in the middle of the cave. The skylight where the sunlight goes through into the cave is a selling point that makes Paradise Cave special among caves in Phong Nha Ke Bang National Park. 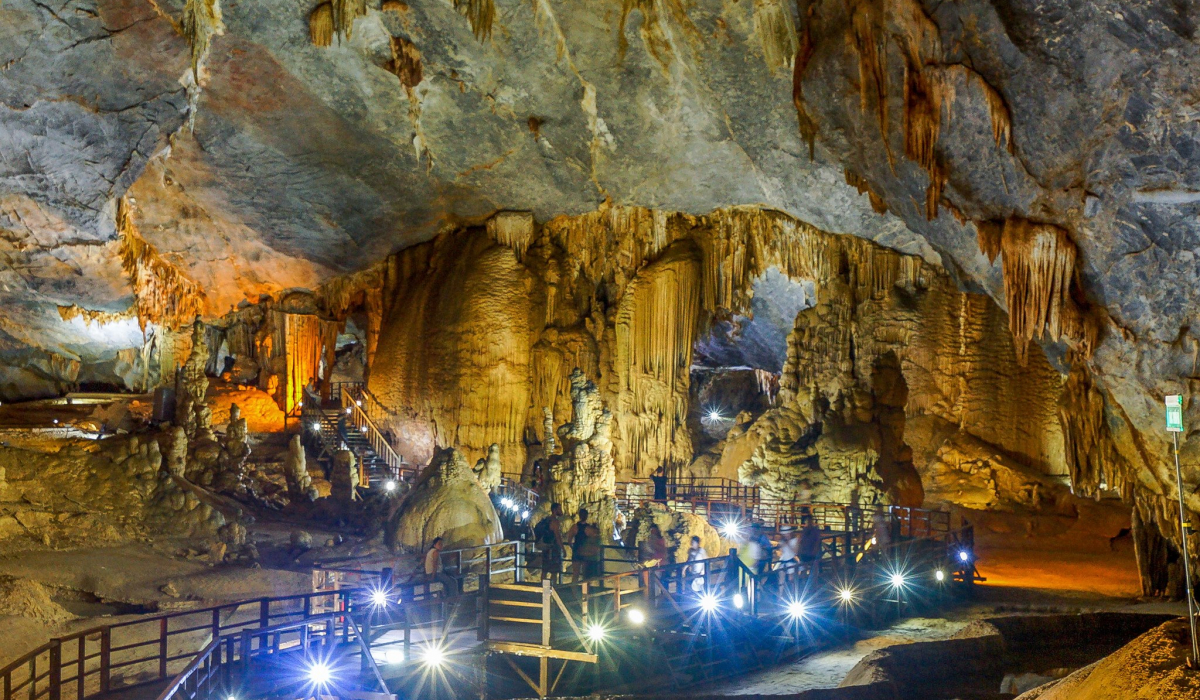 Tu Lan Cave System next to Phong Nha Ke Bang National Park, Vietnam
Location: Minh Hoa District, Quang Binh Province, Vietnam, next to Phong Nha Ke Bang National Park, about 40 kilometers from Phong Nha Cave.
Area: 2 km2
Tu Lan Cave System includes over 10 discovered caves and about 10 unknown caves. The whole system is a karst area of about 2 km2. Tu Lan Cave System is now open for visitors. It attracts tourists worldwide by its remote jungles, buffalo fields, limestone mountains, and underground rivers. However, the government of Quang Binh Province aims to keep this cave system totally natural so that everybody setting foot here will feel like they were the first to enter this cave.

Da Nhat Beach lies in Thanh Trach Commune, Bo Trach District, Quang Binh Province, 47 kilometers from Phong Nha Ke Bang National Park, Vietnam, and 40 kilometers to the North of Dong Hoi City. The name Da Nhay Beach can be translated into English as “The jumping rock beach” because of the topographical characteristics of the beach. There are thousands of rocks in weird shapes reaching the sea which creates the selling points of this beach. Da Nhay Beach is one of the most attractive sites near Phong Nha Ke Bang and one of the most important tourism spots in Quang Binh Province, Vietnam. 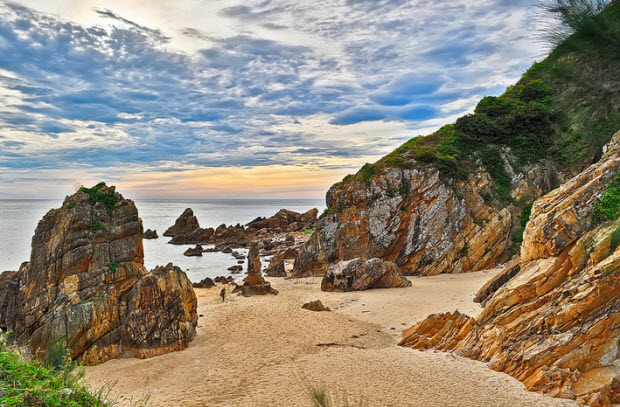