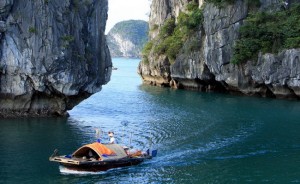 Ha Long bay is a unique heritage because it contains important vestiges during development and formation of the Earth history, a cradle of the ancient Vietnamese residents, and a great shaping artwork of nature with the presence of thousands of diverse islands, with a lot of interesting caves clustered into a both lively and mysterious world. In addition, Ha Long Bay is also a home of high biodiversity with typical eco-systems along with thousands of abundant plant and animal species. It is also associated with cultural values ​​- the heroic history of the nation. 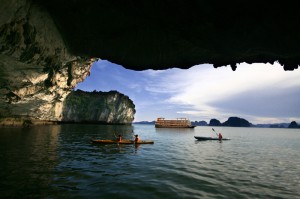 The image of Ha Long Bay with thousands of islands has been compared as countless rubies spouted from dragons.

Ha Long Bay was long formed due to tectonic structure. However, in the mind of Vietnamese people from prehistoric period with rustic imagination and the idea of ​​folk root “Dragon’s children, Fairy’s grandchild”.  Some fables said that right after establishment, Vietnam was invaded, and then Jade Emperor sent Mother Dragon and her children land down to help the Vietnamese fight against the enemy. Invaders’ boats were rushing to the sea shore when dragons landed down on earth. Dragons immediately spouted fire and burned enemy’s ships and released rubies to erect stone halting the attack of enemy. 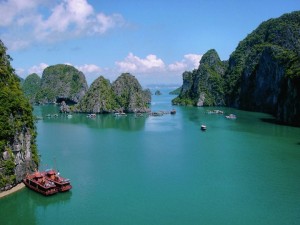 After the victory, saw peaceful landscapes on the ground, lush plants, diligent, hard working and unity people, Mother Dragon and her children dragons did not return Heaven but stayed on earth, where had occurred the battle to protect Dai Viet generations. The location where Mother Dragon landed called Ha Long; where her child landed is Bai Tu Long and dragon tails thrashed water called Bach Long Vi (now Tra Co Peninsula, with a sandy beach over 15 km long).