Left behind 100 other works, the Vietnam Bamboo home Blooming finished in second position (Highly Commended Award) in six finalist projects of WAN House of the Year 2014 in WAN Awards 2014, UK. 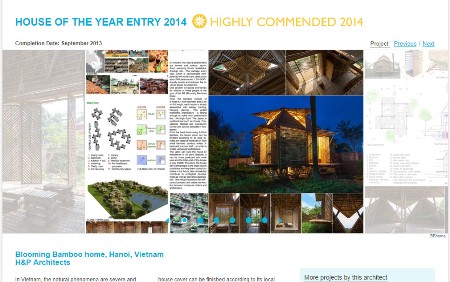 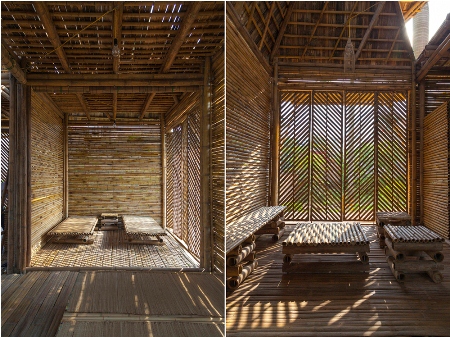 The house has great flexibility with sustainable elements

At WAN Awards, the Vietnam Blooming Bamboo home of company H & P Architects is one of six projects shortlisted and in second position Highly Commended Award – Award honors good idea and social responsibility of the project. 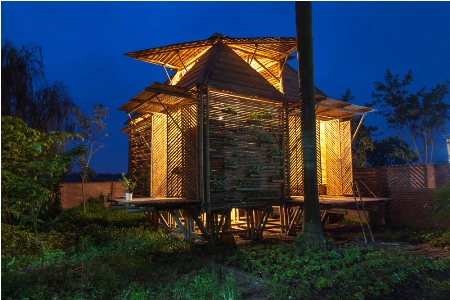 The Vietnam Blooming Bamboo home is not only excellent in its unique design, direct response to natural phenomena and serious changes occurred in Vietnam, but it also can be built within 25 days. With multi-functions such as housing, classroom or clinic, the work has been recognized because of its great flexibility with sustainable elements. “I think it is really nicel, a great idea … I love it!” Piers Gough said. The judge Julian Gitsham noted the “beautiful interaction of materials”, and emphasized on the simplicity of design ideas.

WAN House of the Year 2014 was awarded to: 1 Winner (Spain), 1 Highly Commended (Vietnam), 4 shortlisted (UK, Australia, Germany, Mexico). On October 14, 2014, awards were given to six above projects at WAN AWARDS House of the Year Exhibition 2014 in London, England.

WAN House of the Year award began in 2009. This prestigious award celebrates and encourages the best international architectural works, attracting the participation of all countries. This year’s competition opens for all single-family houses completed in 2013.

Vietnam warmly welcomes you to enjoy Vietnamese cuisine and to make your trip in smooth water, turn your plan into real by quick hands to obtain Vietnam visa at http://govietnamvisa.com and for Vietnam eTicket at http://vietnamairlines247.com.
For your memorable travel, it is convenient to book tour at http://govietnamtour.net
For your great stay and nice relaxation after a long trip, it is nothing better than booking hotel at http://govietnamhotel.com