When visiting Vietnam, a photographer Ton Koene was surprised of motorcyclists who can carry cumbersome items behind and travel easily. Western Tourists Are Surprised Of Vietnamese Motorcyclists. 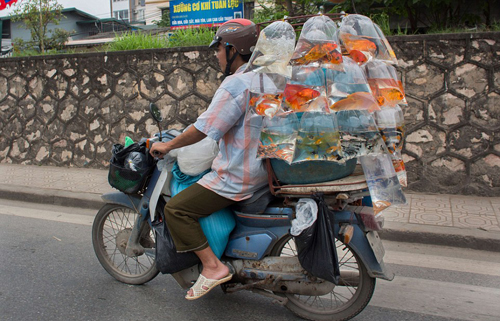 These jaw-dropping scenes from the streets of Vietnam will leave even seasoned tourists wondering if there is anything these motorcyclists can’t balance on the back of a rusty old bike or scooter.

Photographer Ton Koene captured the delivery drivers as they transported everything from trees and bags filled with live fish to cases of bottled beer and massive boxes. 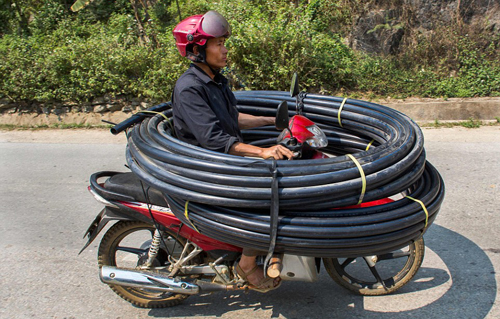 An assortment of exotic fish is in bags and ready for sale, cleverly attached to this man’s beaten-up motorbike.

This man’s motorbike was almost completely obscured by piping as he cruised along a street in Vietnam. 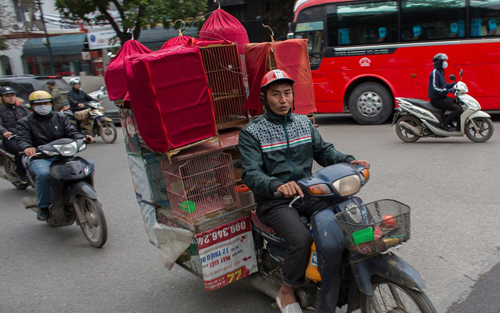 Even seasoned tourists are left wondering if there is anything these motorcyclists can’t balance on the back of a rusty motorbike.

There’s seemingly no measure to what can be packed onto the back of a bike or scooter in Southeast Asia. 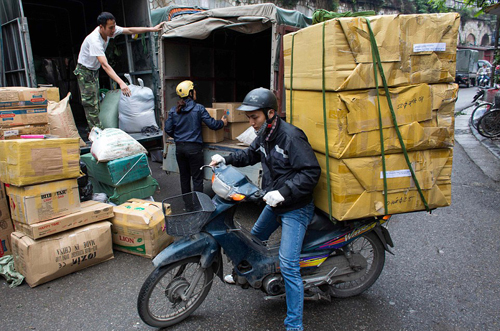 The amazing scenes play out on a daily basis in Vietnam, but they’re an eye-opener for Western tourists who aren’t accustomed to seeing such things.

Ton’s photos show the riders carrying almost everything imaginable on the backs of their small motorbikes.

Getting around on two wheels is a way of life in Vietnam where there are more than 37 million motorbikes (and only a few million cars). 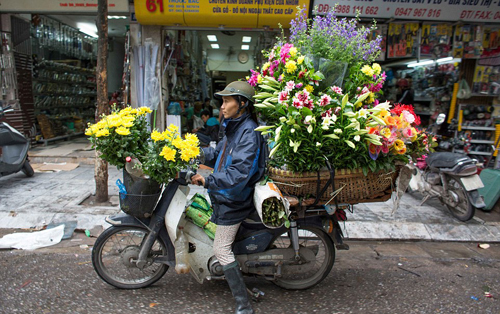 He said: ‘There is really nothing in the world that Vietnamese can’t transport with their scooters. Fat pigs, big sewage pipes, bamboo poles, carton boxes or the entire family including the grandmother and the dog.

‘With the upcoming economy, owning a scooter is a symbol of freedom and wealth, like it is for people in many other countries to have a car.’ 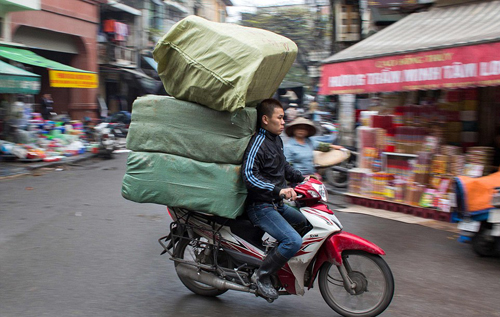 ‘Normal city cars are too expensive and not very handy in the narrow streets of the crowded city where parking a car is impossible.

‘Your motorbike, however, can be parked anywhere on the site-walk.’ 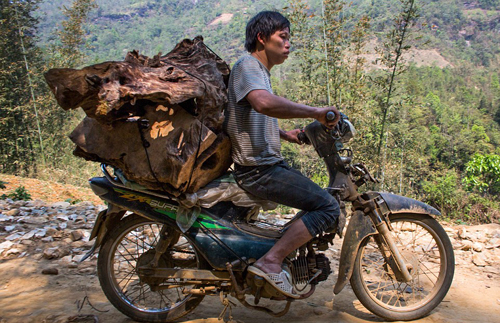 With so many motorbikes and scooters, pedestrian safety and the availability of parking spaces are issues, in addition to air pollution, especially in larger cities such as Hanoi.

When tourists climb onto a motorbike it can be an overwhelming and dangerous experience.

Ton said: ‘Tourists love the motorbikes but are often inexperienced driving on unpaved road in rural areas or in extremely chaotic and congested traffic in the cities.

‘Every day one can see youngsters from Europe, America and Australia walking in the streets with serious wounds and injuries as a result of scooter accidents.’

He added: ‘After a day walking in the city, one can get mad by the never ending loud engine and honking noise of the always surrounding scooters. 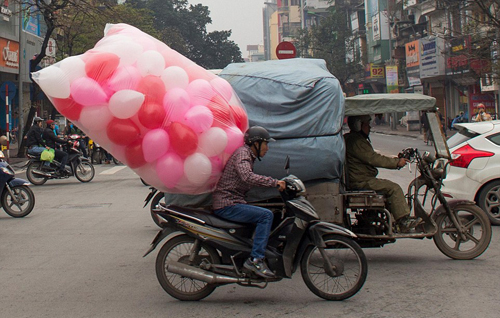 One image shows a man’s motorbike almost completely obscured by bundles of piping, while another rider looks like he could float away as he hauls a giant sack of inflated balloons.

Ton said there are about 30 million two-wheeled motorized vehicles in Vietnam and they make up more than 90 per cent of all the country’s vehicles.