A symbol of the tenacity and resilience of Hanoian people, the Long Bien Bridge is seen as the icon of courageous capital in wars.

Connecting two banks of Red River, linking Bong Bien district and Hoan Kiem District, Long Bien Bridge is the first longest steel – made bridge retaining the splendid architectural style in Vietnam in the early 20th century, which was built by the French (1982 – 1902). The bridge has attached many memories of the citizens in the heart of Vietnam when witnessing the panoramic picture of the history of Hanoi. Despite more than a hundred years of age, the bridge is nowadays still in use and becomes one of the most superb tourist attractions in Hanoi alluring numerous both domestic and international tourists to delve into. Long Bien bridge was build by French in 1899

Despite more than a hundred years of age, the bridge is nowadays still in use and becomes one of the most superb tourist attractions in Hanoi alluring numerous both domestic and international tourists to delve into.

More than 100 years with decades of war, Long Bien Bridge was bombed many times by air attacks by the American army in 1967, 1972 and many spans of the bridge were destroyed. The left spans still remaining today remind us of unforgettable past. Hence, the bridge is not only a traffic construction, a nice architecture but also a living historical relic.

Long Bien bridge started it’s construction in September 1898 and finished after 3 years 7 months. The initial name of Long Bien bridge was ” Doumer Bridge”, the name of Governor – General of French Indochina at that time. Nowadays, the bridge still remains the metal plaque engraved ‘ 1899 – 1902 – Dayde & Pille – Paris’ on the head of the bridge.

Long Bien Bridge includes 20 piers and bridge abutment with the depth of 30 m and 13.5 m in height. The construction of 2 roads on both sides and a railway in the middle seem the most prominent of the bridge. Instead of hiring Chinese workers like before, the ingenuity and subtle Vietnamese workers directly assembled metal components, operated cranes… under the professional instruction of French engineers. 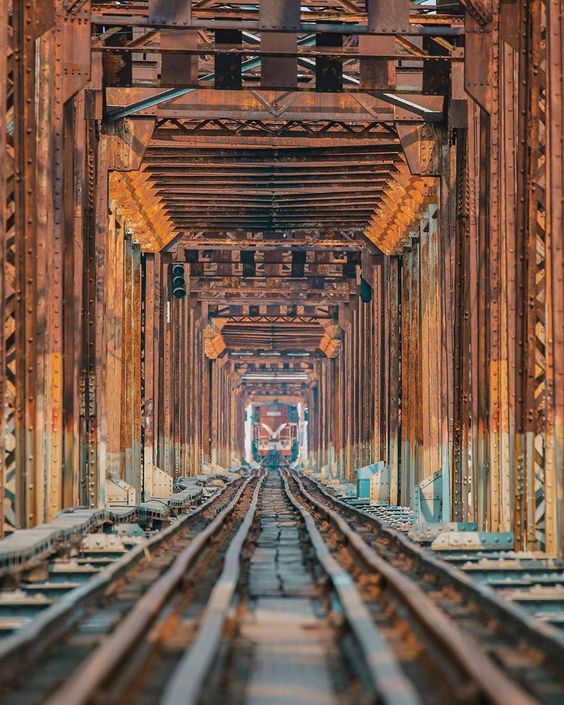 Long Bien Bridge is not only a fundamental traffic construction, a typical architecture, but also a real historical relic.

There are more than 5,300 tonnes of French steel, cement produced in Hai Phong, wood from Thanh Hoa, and over 30,000 m3 stone from many parts throughout Vietnam to create Long Bien Bridge as we see today. With a length of 1,682 m and about 896 m long of approaching the bridge, Long Bien bridge is divided into 9 frames with 61 m in length of each, and it is the first bridge of the railway route running through Indochina and Hanoi – Hai Phong route as well. Particularly, steels used on Long Bien Bridge is the same with steel creating the famous Eiffel Tower in Paris, France. As a result, discover the unique architecture and heroic history of the bridge will surely one of the most fascinating things to see in Hanoi.

Today, Long Bien is only one of the five bridges crossing the Red river of Hanoi. However, it may be the most special bridge with unique historic, architectural, and cultural value. It is the only bridge in Hanoi where all the riders have to go on the left-hand side, where tourists can take a walk and taste mouthwatering desserts offered by vendors. Where Hanoians can buy fresh vegetables or fish for the dinner from the small afternoon market on the bridge. 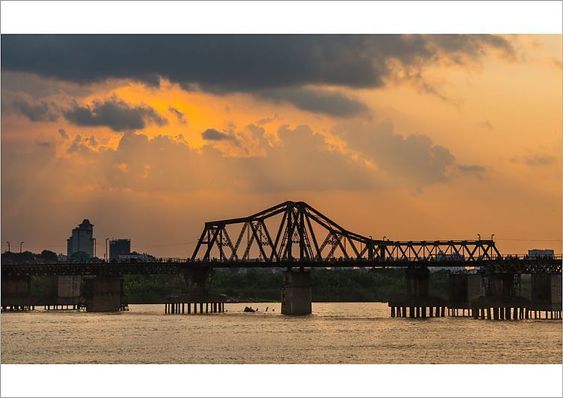 If you are looking the place to sense the sunset in Hanoi, Long Bien bridge is ideal space, not to be missed.

Many Hanoians and visitors coming to Hanoi said that Long Bien bridge is the ideal place to look at sunrise as well as sunset, of course, taking the myriad of wonderful photos. Moreover, the bridge is the perfect background that many couples choose to save their nice wedding albums due to its historical construction and breathtaking scenery. Besides couples, Long Bien Bridge is always on the list of Hanoi destinations that the young want to keep their memories of youth on the old bridge.

Long Bien bridge becomes the oldest bridge in Hanoi and shares every walk of life with Hanoians in silently. If you visit to Hanoi, do not forget to take on Long Bien bridge to feel every of life in an old corner of Hanoi, delve into peaceful moments t the present and memorable past.

How to get Long Bien bridge