As Matadornetwork, here is an article by Ms. Jacqueline Kehoe (American) who wrote on her blog about the habits to quit while in Vietnam. Now, let’s see 13 American habits will be lost when travelling Vietnam. 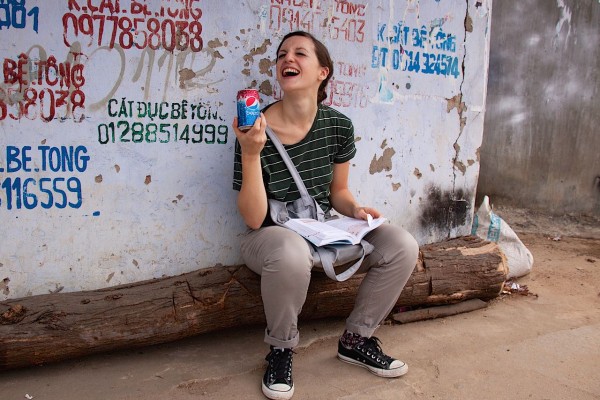 Prior to Vietnam, I was one of those girls. You know the kind: the ones who scream when they see a spider and proceed to leave it under a mug for days. I’m not proud — that’s just how things were. But then I was adopted by the great country of Vietnam, where more often than not, the trà đá (iced tea) comes with a complimentary garnish of protein.

For breakfast, I generally dream about oatmeal, scones, muffins, or cereals. I used to describe myself as a vegetarian for lack of the term “dessertarian.” Therefore in Vietnam, I had my work cut out for me — their version of dessert is sticky rice, chè, flan, or, God forbid, moon cakes.

But one day a switch got turned on, and I thought to myself, “Man, I could really go for some flan right about now. With some ice cubes and coffee on top? Mmm.” If this happens to you, don’t be alarmed. This is just assimilation. Your tastebuds do it, too.

Because in Vietnam, you never assume you won’t get diarrhea. Every menu item from rau muống xào tỏi to bún bò Huế is like a “Choose Your Own Adventure” story. And that bucket of water next to that hole in the ground? Fantastic, that’s all I need. I’ll just swat away these flies, thanks. Khong sao. Sure, a man waiting to hand me Egyptian cotton towels to dab my face with would be nice, but this bidet from 1987 is just as useful. And there’s no toilet paper? Yeah, I know. That’s what this handy-dandy wad in my pocket is for. No, I’m not sharing. Get your own.

In America, there’s kind of this unwritten rule: if you catch someone looking at you, you quickly look away. Then, when you’re the one caught sneaking a peek, the other person returns the favor. In Vietnam? No such luck. There is no way to deter someone from staring at you short of a hairdo full of snakes (just kidding, they still would).

To cope, what do you do? You start staring back, that’s what. It may take months to finally get used to it, but eventually you’ll wish staring contests were an Olympic sport. Fifteen-second blinkless gawks at a red light on Hai Bà Trưng? Child’s play. Sometimes you throw a violent twitch in there just to see if they flinch.

As a 5’11″ normal-sized American female, it’s pretty safe to say that I don’t fit in with most other women in Vietnam. More than once I had this point drilled home to me, but the most defining moment stands alone: I walked into a birthday party for my friend, Hai, immediately noting that I was the only foreigner present. His mom turned to the table of partygoers as I walked in, cheekily said something in Vietnamese, and the entire table erupted into laughter.

I had to beg Hai to tell me what she said — my Vietnamese was okay, but only with context — and with enough prodding, he relayed her message:

“You only get tits like that on butter and cheese.” So, after that, screw it.

Like many Asian countries, dairy just isn’t often used in Vietnamese cuisine. Condensed milk is pretty common for obvious reasons, but other than that, no dice. A student of mine once visited Minnesota (of all places), and when I asked him what he thought of it, his reply was one word: “cheesy.”

That was actually quite astute, and somehow I found it just as surprising: the food in Vietnam is so good that you don’t really notice that it’s not topped with cheese or butter. You can definitely find cow’s milk and cheese if you look for it, but “soya” milk is all the rage, and it’s delicious to boot. Now back in the States, I’m a soy-milk-drinking, tofu-loving American (though I still put cheese on whatever I can).

Once on a backroads scooter trip, my friends and I came to a road near the village of Rang Rang that was being turned into a reservoir. In other words, there was a giant lake that had just been planted in the middle of our route. Our options were to either turn back (which required spending another five or six hours working our way down this muddy, dangerous mountain) or to let two 16-year-old boys essentially caulk our scooters and float them, Oregon-Trail style. I had to let go of my lack of belief in others — especially two emaciated-looking young boys with 150-lb Vespas — and trust that they were resourceful and knew what they were doing. And 45 minutes later, the six of us and our two scooters made it in their canoe across the lake, no worse for the wear (just 300,000 VND shorter).

While Vietnam does have the ability to let you see the resourcefulness in others, it also helps you see the conniving, manipulative side of that resourcefulness, too. Talk to any expat in this neck of the woods, and they’ll likely have a story to tell you about their bag getting snatched. My roommates and I had our bikes stolen from the gated patio connected to our house and the bars on our kitchen windows were mysteriously warped on a few different occasions.

Eventually, you do learn to walk around with a don’t-fuck-with-me vibe, and you no longer become an obvious target for petty theft. Once I was stupidly walking down Nguyễn Đình Chiểu with my wallet in hand when two men drove up on a shoddy Honda Wave and tried to wrestle it from me. Luckily, I had a split second’s worth of this skill developed, and they drove away empty-handed.

I’ll never forget the time I had to drive 20 minutes through a monsoon wearing a plastic tarp barely trying to pass as a poncho. I was soaked to the bone and absolutely miserable. When I walked into Ngon, my friends’ eyes widened and their jaws dropped. One prompted me to look in the mirror and, needless to say, the black stains running down my face were not cute. Sure, some mascara is waterproof, but few are Vietnamese-downpour proof. After that day, I was done. I decided to go au natural.

One of the best things about Vietnam is the cost of living. Even at a nice, upscale restaurant you can get a good meal for single digits. That being said, you can get a good meal on the street for much, much less. And a beer? Leave your bills at home — your pocket full of quarters will do. Grabbing some street phở and a ba-ba-ba on Bui Vien street is addictive, and I found myself yearning for plastic stools at aluminum tables more than pillowed seats in air conditioning. And back in the States where a banh mi is $8? HA. Nice try, America. I’ll give you $1.50. That’s, like, three times what it goes for in its homeland.

The streets of Vietnam are the same as their elevators are the same as their hallways are the same as their green space. If there’s room, someone is going for it. Six inches available on the sidewalk? That’ll be a competition between a dozen motorbikes. Three people trying to get off the elevator? Nope. Sorry, guys. You have to wait until seven people get on. The door to the jetway is now open? Sit back down, unless you want to throw some ‘bows. And don’t get attached to that strip of grass next to your house. In six months, that will be a Mobiphone and a KFC.

Karaoke being blasted from next door? Relentless honking at 3am? Ah, bliss. The sounds of Vietnamese lullabies.

It’s April and Mariah Carey’s “All I Want for Christmas Is You” is playing? Followed by “Happy Birthday?” Yep, sounds about right. Don’t hold out for cake; it’s not coming. If it were, I never would have left.