Not only using wrong manner of chopstick eitquette, but many foreign tourists also violate taboos when they leave standing chopsticks vertically in a bowl of rice or other food or point other people with these tools.

Here are common mistakes of foreign tourists who are familiar with knife and fork:

Chopsticks are used to pick up almost food.

Author of website Viet World Kitchen, Andrea Nguyen said: “Chopsticks are technically the major eating utensils for the four East Asian countries — China, Japan, Korea, and Vietnam”. So in the Philippines, for example, most dishes are actually eaten with a fork and spoon. In Thailand, chopsticks are used to eat spaghetti only.

Stick them vertically into a bowl of rice

This is a taboo in almost Asia countries including Vietnam, China and Japan. “You only do that when making offerings to dead people,” warn Harris Salat and Tadashi Ono, the owners of Brooklyn’s Ganso and Ganso Yaki. It’s also a no-no to pass food from chopstick to chopstick because it resembles a Buddhist funeral rite. Nobody wants to contemplate mortality while eating. 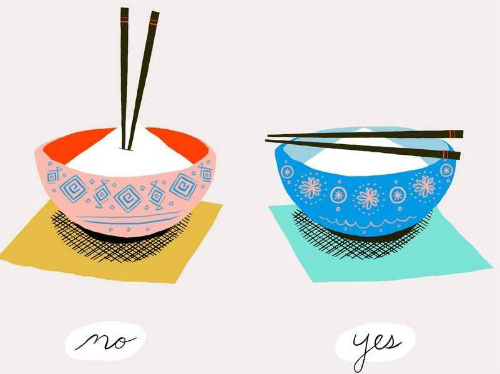 Left is wrong manner and right is true manner.

Pick up nigiri with chopsticks

The proper technique is to lift sushi up with your fingers, turn it over, and dip it into soy sauce fish-side first. That way the rice won’t start to break apart before it hits your mouth.

“During formal meals, if you have to pick up food from a communal plate, turn your chopsticks around and use the clean ends,” advises Nguyen

Separate the couple of chopsticks

“When chopsticks aren’t in use, they sit together on either a chopstick rest or rice bowl. They’re always a pair,” say Salat and Ono.

Hold chopsticks at the tips 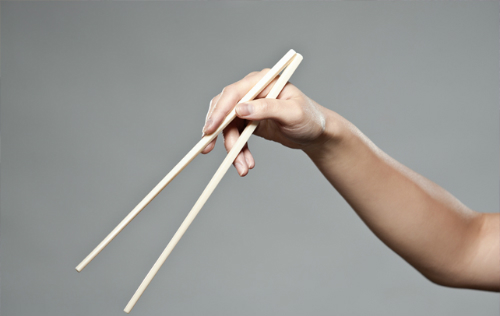 “A common learning-curve issue for many people new to using chopsticks is positioning their fingers too close to the tips,” observes Erway. “Once you gain more control of using the chopsticks — which I believe just comes from experience — you can move your fingers down further.”

Use chopsticks to point at people

Pointing is rude in any culture. Pointing with chopsticks is worse.